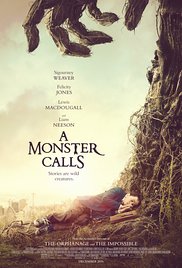 When I saw the trailer a few weeks back, I made a mental note that this film was a must watch. My two girl friends and I went to the cinema to watch it on the last day before the film switch for the week, and the movie did not disappoint. It also made us weep quite a lot!

Thoughts on the Film

The visual effects were spectacular. It was a delight that the three tales had its own kind of animation. Liam Neeson’s voice fits the low, gravelly sound of Papa Groot (sorry, can’t help it), and while there was a lot of authority and command, he/it sounded gentle and consoling enough for the troubled boy.

Its emotional appeal and tug at the heartstrings were beautifully executed in the narrative. It just had the right kind of nostalgia for Conor’s confusion with his attachment and detachment to his mother and her terminal illness. Felicity Jones had the perfect kind of tenderness for a (dying) mom. Despite little or limited screen exposure, she was very effective.

Somehow, when thinking of guardians of children facing life issues, I am reminded of The BFG and My Neighbor Totoro. But since we’re dealing with illness and death, the Hayao Miyazaki classic has similar elements here for the protagonist to survive difficult emotions. 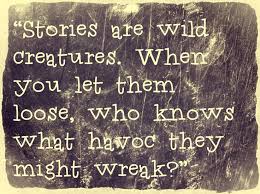 While Totoro and the sisters had secret adventures, Conor’s realizations were challenged by stories. These stories mostly dealt with themes of justice, prejudice, belief, and choices. In the end, he had to tell his own story: the truth.

It was a nice closure for Conor to discover his mother’s artwork…and how, it seems, that the monster was the guardian that she had designated for him.

Thoughts on the Book

The title was out of stock in all branches of National Bookstore, so I went to Fully Booked to search for it. I was excited to read again about the three tales, and the book had a more menacing monster yet still fantastic illustration.

The only major difference of the book from the movie adaptation was that there was no mention of Conor’s mom as an artist. Because the author, Patrick Ness, also wrote the film screenplay, I think it was a good move that the last few scenes had contextualized what was missing from the original text.

A minor omission from the book came in the form of Lily, Conor’s sort of female best friend. She fiercely protected him, and he was more vulnerable in that sense. It worked in the screenplay, though, that book character Lily was absent so that the focus would be on Conor’s solitude.

For a YA novel, the book on its own could be heavy material for anyone. My friend, who read the book first before watching the film, had to process herself after finishing the sad but inevitable end. Therefore, my recommendation would be to watch the visual form first before reading it.

This is definitely one of the best movies I’ve seen in 2016.