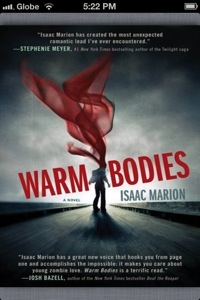 Got Gaiman’s Calendar of Stories for free, but am not sure if it’s still open for downloads in his website. Warm Bodies was sent to me by a friend. I kinda wanna watch the movie first though. Reading the first few pages makes me think of The Walking Dead zombies and gives me the creeps. 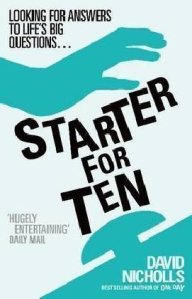 I had high hopes for this because I loved One Day, the tragic love story by the author. Luckily, the nerdy references of Brian Jackson, this book’s protagonist, and his penchant for trivia and literature as an English major amused me. It took a while to get into British humor that I’m not as exposed to, but I smiled at the teenage cringe-worthy thoughts of this adolescent thrown into the real world. The lion’s den was the dream to be on TV’s “The University Challenge,” and the predator was Alice, his love at first sight. The existential question he had to face was to differentiate knowledge and wisdom, which of course, he learned the hard way. The game show team dynamics, his family, his childhood friendships, and his foolish infatuation, all came into play in drawing out the real Brian in the end.

Yes, we could very well say that what we know isn’t enough to build a life. The insights and realizations from all the bad choices Brian made helped him be the better guy, see the better match for his love eventually. Pretty straightforward, right? On more exciting news, when I Googled the title I found out that there’s a movie adaptation starring James McAvoy as Brian, with Mark Gatiss and Benedict Cumberbatch! I’m going to look for the movie version to know what’s more effective in rolling out the punches of this comedy.

We all hope to find that someone who could tolerate our crazy side, all the more love us despite the quirks, the shady past, the traumas that scarred. This adaptation of Matthew Quick’s novel shows us in the end how love soothes, transforms, and heals. But in between? Well, here’s an alternative look at the bumpy and difficult realizations of truths and recognition of signs to move on from the hurt.

I’ve always liked Jennifer Lawrence’s candid personality off-screen. She’s uninhibited and funny and she probably doesn’t care if her facial expressions have already become memes. Who among the young actresses have thought of bringing BOTH parents to the SAG Awards? Only she did. She’s adorable, she feels REAL, so this is what she brings in this film that makes her unforgettable (and critically-acclaimed too).  She can be edgy, she can be sweet, she can really be bitchy, and yes, she attempted to dance. Equal importance to Bradley Cooper’s fine performance must be acknowledged as well. The chemistry and repartee of these two actors is just amusing to watch as they tried to resist intrusion of each other’s lives. Their x-deal had forced them to be stuck with each other, which was probably the best decision they ever made.

The heart of the movie isn’t complicated, it’s the journey that is. That’s the brilliance of this film. You’ll be reminded by the labyrinthine chaos and drama that we all go through dealing with our own personal tendencies, clinical or not. In the end, the universal truth that solves it is inescapable: that we all need each other to make this crazy life bearable and better 🙂

I’m still not over my Les Mis fever so here’s an older adaptation sans all the singing. Since everyone already knows by now how the story goes, I’ll cut the story summary and proceed to my review. Liam Neeson gives just and dignity to Jean Valjean. Seems like Neeson can portray ANY role and satisfy the viewer’s expectation of the character (sorry, I’m a fan of all his movies).  What’s memorable about this screenplay was that Valjean was not just seen to reform morally and spiritually. He also tried to educate himself because he was illiterate, and Neeson as Valjean had secretly tried to learn how to read and write in his home and in his office. Since Neeson always had that gentle yet firm character, it was just proper to have casted the fearsome Javert to Geoffrey Rush. Tension, tension! Props to Uma Thurman too as Fantine, because you’ll really feel sorry for her as the village looney and whore in this film. Her dying scene was really tragic. She looked horrible and delusional. Claire Danes was okay as a young Cosette. Marius is quite forgettable.

What makes this film different? No Thenardiers and no Eponine! They also changed the ending. You will not see Valjean dying. Did the producers back in the 90’s think it was too depressing to have been true to the book? Probably. It’s still worth seeing how it compares to the other interpretations. I am currently re-reading Victor Hugo’s text, and the adaptation I have yet to see is the full musical on Broadway or West End (which might not happen at all in my lifetime). The Oscars are up soon and I can’t wait for the Original Song musical production of this! 🙂

It’s bad ass, but too bad ass the audience was groaning loudly every time they mercilessly killed the evil witches. I think MTRCB should have rated it an R-13 instead of PG-13 because there were a lot of skull-crushing and it had a full-body nudity scene to seduce Jeremy Renner that was quite unneeded! Other than that, in all fairness, the back story why the siblings were left in the forest by their parents made so much sense, and that their hatred towards the witches were pretty much vindicated by the whole story arc. The fight scenes were good, their weapons really cool. There’s not much to say after because their main adventure to eradicate all bad witches in the land sums it all up. A sequel will be pushing it too far.