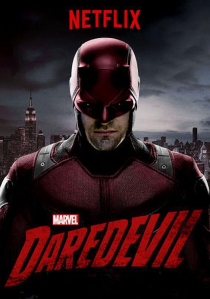 We all just vaguely remember the Ben Affleck attempt on this one, so I don’t have much to say on how he compares to Charlie Cox as a hero. Let me just segue on how far Cox has grown physically and artistically from where I remember him. He was a dorky but charming Tristan in the 2007 Neil Gaiman movie adaptation of Stardust with Clare Danes which I loved. I was pleasantly surprised to learn that he was cast as this gritty, badass devil (pun intended).

The noise that came from Daredevil’s hard-hitting (literal and figurative) approach to redeem Hell’s Kitchen from the intercultural mafia that controlled it went viral so it caught my attention. I kept cringing at the blood and violence, but it never stopped me from watching the episodes. I had to know how Matt will keep fighting on his own despite his brushes with near death. His biggest conflict in his life though is not his commitment to be a vigilante, but with his Catholic faith.

Claire Temple: Okay, I find a guy in a dumpster who turns out to be some kind of blind vigilante who can do all of this really weird shit like smell cologne through walls and sense whether someone’s unconscious or faking it. Slap on top of that, he can take an unbelievable amount of punishment without one damn complaint.

This Marvel character is framed by the polarity of its own semiotics. For a Catholic who was taught to believe in heaven and redemption, his life seemed like eternal damnation. Matt Murdock had to deal with his father’s murder, then he lost his eyesight, was abandoned by his guardian, Stick, and his ex-girlfriend was mentioned to have succumbed to being a druggie all in a place called Hell’s Kitchen in New York. Even Karen, his legal secretary’s life, is scarred by crime and death on the Big Apple, but thank goodness for the corny but compassionate humor of Murdock’s law firm partner Foggy Nelson, there’s levity to brighten up the trio’s cramped rented space for a firm. It is a difficult struggle for Matt to understand divine redemption because he is challenged by abomination, where it is hard to not give in to vengeance when the higher road is supposedly forgiving. The irony to ‘walk in faith, and not by sight,’ every step of the way is met with a lot of resistance because he wanted successful plans and results to bring Wilson Fisk and his colleagues down. He is certainly not waiting for God to bring about justice, but he is racked with guilt and it bothers his soul so much that it brings him to visit his priest friend every now and then.

Father Lantom: How you holding up?
Matt: Like a good Catholic boy.
Father Lantom: That bad, huh?
Matt: He was a good man. And he’s gone because I haven’t stopped what’s happening to this city.
Father Lantom: Can’t put that on yourself, Matthew. You’ve done everything you can. A lot you probably shouldn’t have.
Matt: And here we are.

The great thing about the plot is that it’s straightforward. You will enter into the series knowing this crime fighter will take down all of the villains one by one, or die fighting. There aren’t a lot of storyline detours, and the anticipation for the big face off with Daredevil and the Kingpin is quite a breathtaking one. After all the anecdotes of questioning morality that had built up the confrontation of villain and superhero, one’s certainty on who’s evil and who’s good will surely be confused towards the end. Whose idea of justice should we revere more? Isn’t the Daredevil acting as the lesser evil still being evil? The dialogues between our masked man and Father Lantom are the best and thought-provoking gems of it all. I honestly want to post them here, but those would be spoilers to what makes this superhero the most reflective on ethical, spiritual, and moral dilemmas. Marvel made a great decision to reboot this one, and I can’t wait for 2016 for season two’s life-changing insights on the human condition.